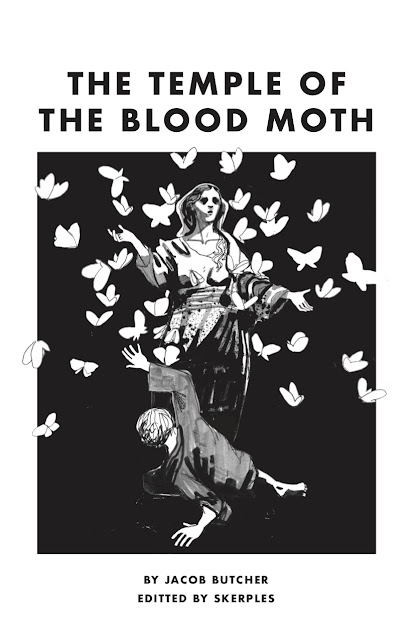 You can get a PDF of my dungeon-zine, the Temple of the Blood Moth, here  at DriveThruRPG, and if you want a physical copy of the zine, hand-printed with a risograph and hand-stamped with a stamp, email me at jake butcher 2 at gmail dot com. (no spaces or anything).
at August 09, 2019 1 comment:

Bankers are Vampires and Vice Versa

In every town there is a bank. You can put your gold there and no one can steal it. If you try to steal gold from the bank, good luck! They'll have insurance and they'll also try to get it back from you. They have everything money can buy.

Something you can learn about the bank that is a secret and not known by most: all banks employ at least one vampire. One of every bank's largest customers is always the area's vampire or vampire population.

This post was inspired by a thread on reddit i think where someone said "Bats are vampire hunters. Vampires are mosquitoes." It's a cool analogy/ecology model. If we take it to be true, Vampires become surprisingly numerous, but unlike IRL mosquitoes (most of the time) vampires are completely deadly on their own as well. If it wants to, a Vampire can move into town and bite the first three people he meets, and the ensuing bloodbath will consume the village. It happens more often than anyone realizes.

Every bank is a blood bank on the side at night. Invested gold is used to buy blood (stabler than gold, ethics don't apply to banks,) which is sold to the vampire community to turn a profit. No muss. No fuss. Humans are gathered by guards and highwaymen alike, through different channels. Vampires have a hand in every powerful organization in every town. Bandits, assassins, non-bloodborne plagues, and doctors are also often contributors to vampires whether they know it or not. Anyone who dies whose body isn't claimed will likely eventually get tossed to the vampire banks or the moth cult (same thing) for draining. After Draining the Vampires or the Cultists can toss it to Necromancers or whoever else can offer the highest price. Teeth make great fairies, you know.

Next time my players go to a village, there's going to be a bank and it will probably scare them.
at August 04, 2019 1 comment: 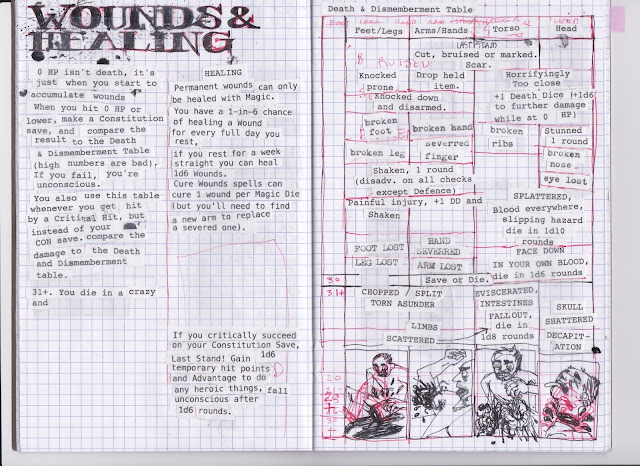 I made new rules for critical hits, wounds, healing, and dying! The Death & Dismemberment table is like 75% stolen from Die Trying (which everyone should check out and throw their money at in whatever way they are able).

It's part of a work-in-progress patchwork/collaged zine of rules for my players. The zine currently includes rules for buying stuff in town, a lot of spells, random potion effects and some now-outdated character creation rules.

Goin' for a type of horrible ultra-violence somewhere between Scanners and Itchy and Scratchy.

Probably going to tweak these pages as I go. This zine might eventually be available online.