This post will be an ongoing attempt to flesh out my campaign world. I'm going to edit it for a while until I have figured out what every named thing on this map is. 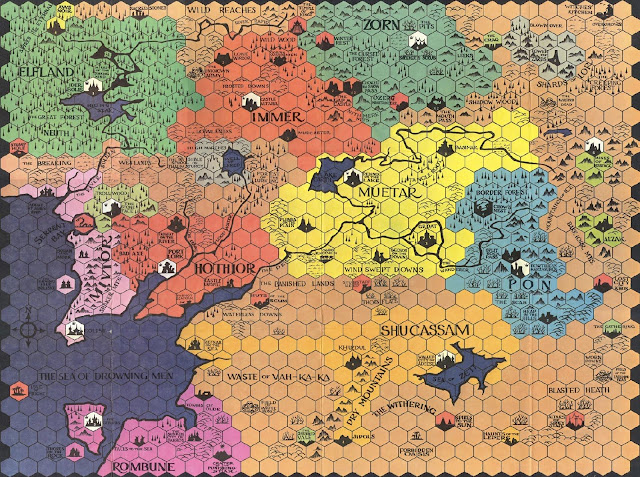 The part of the world pictures on this map the Titancorpse's back, (allegedly) and other parts of the planet are shrouded in mystery. This is the "known world". Some people debate these theories and argue that the earth is flat or a hollow sphere, or that the planet isn't dead. They are generally treated as wackos.

Failure Tolerated posted a thing about using this map for a campaign world and provided a very useful list of all locations, but I sorta messed with the territories/color coding. Red areas aren't Hothior outposts, they're just dungeons.

Pon : It rains all the time.

Muetar : The Muetarran Empire is a powerful theocracy which worships a dead god of light.

Special Rules/Notes: All non-cleric magic and especially witchcraft is outlawed in Muetar. Any signs of magical corruption (horns, curses, etc.) are cause for you to be arrested and potentially executed on sight. You can't wear Wizard robes out in the open.

Mivior : Storm Giants rule here! Those who get struck by lightning and survive become heroes and leaders. Lots of sea monsters.

The Fallen Troll Kingdom : Most of the Trolls died in the Eelwar. All bridges have a Troll.

Shucassam : Desert Kingdom of the Pyromancers. Sorcerer Kings duel for power and Warrior Poets compose odes about the ruins.

Every City in Shucassam has its own Pyromancy School.

The Sea of Drowning Men

Mermaids "rule" this vast sea. Rule mostly just means that kill and eat anyone who falls in the water. Far to the West, the sea flows into the river Acheron which takes you into the underworld.

Mysterious Locations in the Wildlands:

Wild Reaches
Sacred Stones
River Rapid
The Unknown Army
Eastern Waste
The Breaking
The River Sullen
Wetlands
Forest of the Lurking
Western Waste
Witches’ Kitchen
Overgrown
The Creeping Forest
The Wasted Dead
Shadow Wood
Blasted Heath
Worn Downs
Field of the Laughing Dead
The Withering : Holy Pyromancers made contact with the Solar God at the Spires to the Sun, and realized that he was slowly burning the world like an ant in a magnifying glass. The Withering is a stretch of desert which has begun to burn, blacken, and melt.
Forbidden Oasis
Waste of Vah-Ka-Ka
Field of White Bones
The Banished Lands
The Deep
Waterless Downs
Thorn Flats