Last summer I ran a sandbox campaign for my buddies using the hexcrawl map from Divine Right. We left off with everyone splitting up after attempting to sabotage the meeting of a powerful crime boss/Lich (named Lord Gorthus) and the demon lord Moloch (leader of the dreaded Marble Knights). Everyone fled, the whole thing ended with a messy street fight. I'm running a new campaign in the same world this summer which I hope will improve upon the successes of the last one, and hopefully fix some of the problems I was having.

I've been pretty continually dissatisfied with how I've been running cities, but the wilderness/hex exploration part of the game last summer was some of the most fun I've ever had in my short years running games since high school. I also want to use more dungeons.

List of Things I want to get better at/work on in this campaign:
- Running Cities
- I'm writing my own system, so I'm definitely gonna be testing that out.
- Random Encounter Tables

I think the part that the players seem most excited about is the world-buildy stuff, they really like learning about the world, so I want to get better at giving them that kind of information and story.

I was really excited about the new character creation rules, but my players didn't really want to use them? I think I didn't explain them super well and everyone's more used to character-creation as a minigame in 5e while this system is meant to randomize as much as possible while also hopefully creating a sort of rough procedural narrative about the character's backstory: 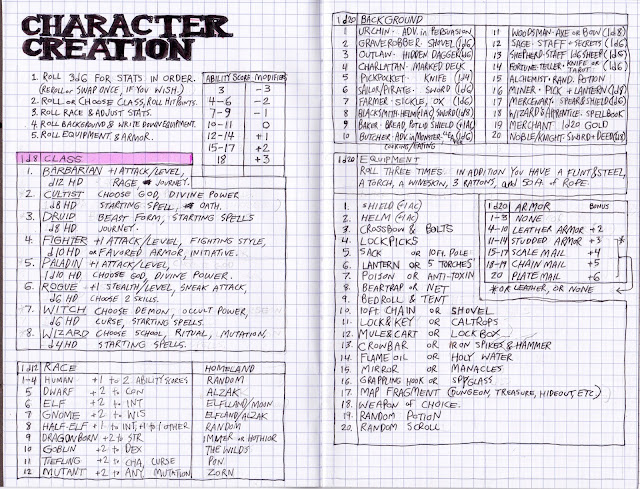 and here's the new character sheet: 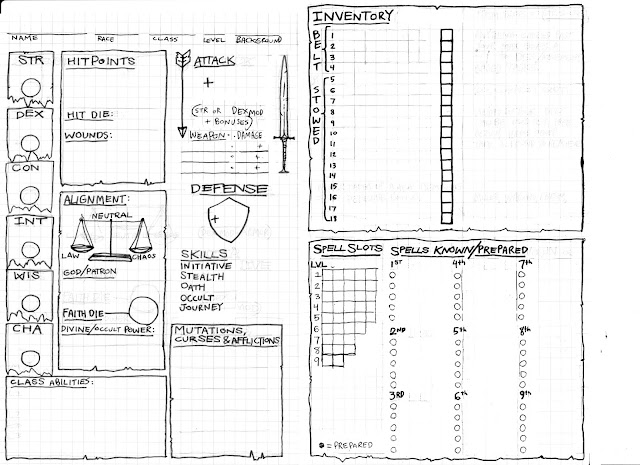 It's still a little bit sketchy. There's some dead negative space in the inventory and spells area that I may box out for character portraits. There are a few things that could use a little explanation in the margin space underneath them.

I think there was generally a little bit of reticence on my players' part about using new rules at all, which I understand, I definitely have been in games where the GM was using homebrew and it sort of felt like more of an indulgence than a boon, but at the same time, this is what's fun for me and I'm putting in a substantial amount of effort to make the rules fun for the players too so hopefully they'll recognize that. It's a work in progress, but I think it's off to a good start!

New houserules include contested combat from Last Gasp and a Divine Magic system like the one used in GLOG i think. You get a Faith Die (either from just being a cleric or a paladin or from praying in a temple if you're just a believer) that you can use to cast a Divine Power given to you by your god. Witches get a similar thing from the Demon they make a pact with.

I'm gonna write another post compiling the basic rules for this system.

The Characters:
Spud, a rogue who operates a mostly cannibalistic butcher shop which is probably in gratuitous violation of every health code imaginable (played by Hannah)
Kürig Cüp, a grimy, grave-robbing, Goblin rogue (played by Greg)
Claude, a Witch and the owner of a very dusty and currently mostly empty magic shop (played by Marius)
Squaml (or Sam), a kindly Paladin of the alien Squid-God Ogdru Zog (played by Tara)

Setting
We started in Thessalon, the City of Pits, an anarchic metropolis of towers and crumbling fortresses reclaimed and converted into shanty-towns and patchwork buildings. The city has a high population of both Witches and the Demons with whom they make their pacts. I think I'll describe the city in more detail in a future post, for now, here's the map. 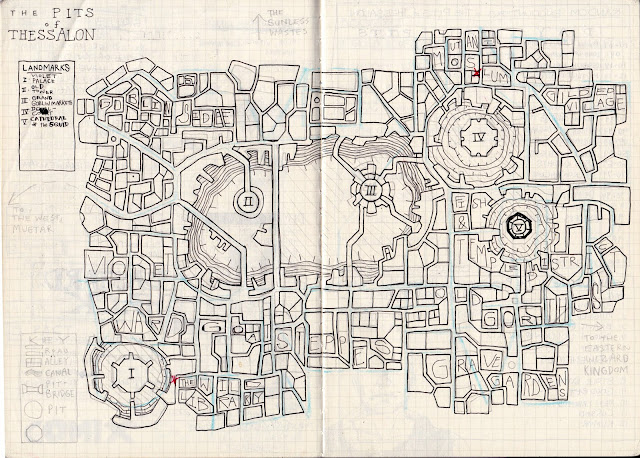 Truncated Session Report:
Squaml intervened in a street fight between a group of Ink Fishermen and Goatmen. One of the Goat-Men cut the throat of a goat and a swarm of snakes poured out of the wound to attack the crowd. Tara then investigated the grave of a woman named Sybil Clover. The squid-in-a-jar told the Paladin to find a garden, and he found strange magenta flowers growing from the grave of Sybil. He investigated at the Corpse-Merchant’s office and found out she was a witch who died 75 years ago, and later made a deal to have Stinky dig up her grave.

Stinky saw a Necromancer in the Grave Gardens and made a plot to kill him to take his stuff which technically eventually worked. This involved hiring an Axeman named Ogden who I am very happy to have around because roleplaying a friendly NPC guy with an Axe feels a lot like just being a player.

Things I Learned:
-Using random tables at the table kind of sucks like 40% of the time. It slows things down. Super helpful for names and other stuff. Gotta get better at pre-generating more of the randomness ahead of time.
-Also Maze Rats might just be the best DMG ever written. I just wish the lists were numbered so it was easier to roll on them as tables.
-I need to make cities work more like wilderness. When I started using the random encounter table for the city every time people moved around, that was pretty good, but it worked even better when I started figuring out locations. I think that just making a list of taverns, banks, libraries, graveyards, mansions, etc. in the city would really help. Only need a very loose idea to work it into a session.
at June 10, 2019